Two Oversized Dogs and a Green and White Army

It has been many weeks since I have had a clear hour to sit down and once more tell about life in Ireland and the hassles of juggling business, family, lawns, pets, short breaks and all the stuff that fills our days.

Once more this week Northern Irish footballers face a challenging match away to Azerbaijan in our quest to qualify for the World Cup in Russia in 2018. Stand close to any true Green and White Army Supporter and the conversation will soon go along the lines of…

“Well are ya goin?” - “I’m not sure ya know what them Russians are like” - “Might be too dangerous and they use that funny money” - “Aye, but sure we probably met them all at the Euros in France and they were only fighting the English so you should be alright as long as you don’t drink too much of their vodka!”

Speaking about Russians makes me think of a trip to Germany a few years ago to visit one of our suppliers, there were some Irish, Swiss, German, Polish and Russian around the table. After a scrumptious meal and a great nights craic it was almost midnight and my wife and I were feeling tired, just as we were about to leave one of the Russian party stood up and announced he had a small gift for the company owner who was hosting us. The man duly passed over a large box which when opened contained a very large bottle of extremely strong vodka, after much applause and cheers it was decided it had to be not only opened but drank before anyone could go to bed. Being non-drinkers my wife and I were able to make polite noises before slipping out of the party. Breakfast was early the next morning and although the Russians were all there looking rested and ready to go, the Swiss and Germans were clearly unaccustomed to such drinking games.

I hope our wee team wins and qualifies for Russia 2018 and I hope our fans travel in great numbers as we did to France last year. I also hope we can fly the flag for N.I. without drinking Russia dry of its best vodka.

On our quest to keep fit and healthy (see my first blog) in 2017 I have moved from running (too hard on joints and bones) to cycling. We visited Chain Reaction Cycles on the Boucher Road in Belfast and were kitted out with all you need for The Giro D’Italia or The Tour De France.

We have found a great place to cycle on a canal tow path which runs from Portadown to Newry via Scarva and Poyntzpass. It is mostly flat, has a coffee shop at both ends and one in the middle; what more can one need for a perfect cycle?

Having grown up in the village of Scarva it has been great to see some of the changes the opening of the tow path has made, Scarva Tea Rooms and ‘Sintons at the Bridge’ have both opened and thrived with the many visitors stopping on the way through.

It has made me reflect on how I started my business life, I was only 16 and wanted to earn some more money so I began to cycle around the village selling American Amway household cleaning products to housewives who I think enjoyed a chat and then felt they should buy something from this young boy! I had great fun for about twelve months and I learned a lot about communication, customer needs, customer service and how to build relationships. All these things I have used over the last 30 years to build our business and also in my personal life as we all live and work in community it is important to build relationships.

I thought again of these things this week as we all reflected on Manchester and London Bridge, I think we have lost our ability to build relationships with others and to build communities wherever we work or live. The blame for Manchester and London Bridge lies fully with the evil people who carry out such atrocities but the aftermath has shown that there is and can be community in the middle of tragedy but it needs to be nurtured and fed in order to survive and thrive. 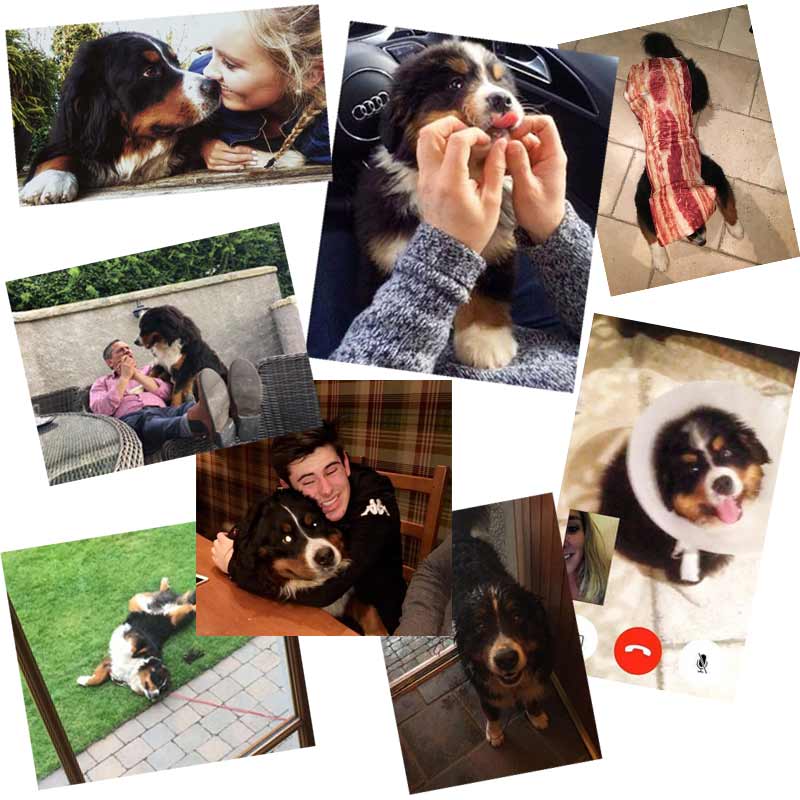 On a more positive note my family are pleased to announce that we are expecting a new arrival in the coming months. We have had a long line of Bernese Mountain Dogs through our home but only ever one at a time, we always said that he was enough, they are big, needy and one was simply plenty for any house.

Lincoln our latest family member is now 2 + ½ and the decision has been made that his life (not ours) would be enhanced by having someone else to play with, walk with and sit on the sofa and watch TV with.

So in September if all goes well with the expectant mum we should have another baby boy to pee on the floors, eat our books, sleep in our bedroom and generally disrupt an already hectic home.

I have added a few pictures of Lincoln to show you what I'm already dealing with and I will keep you up to date when “Junior” arrives and how we are coping with the mayhem of having two needy dogs instead of just one.